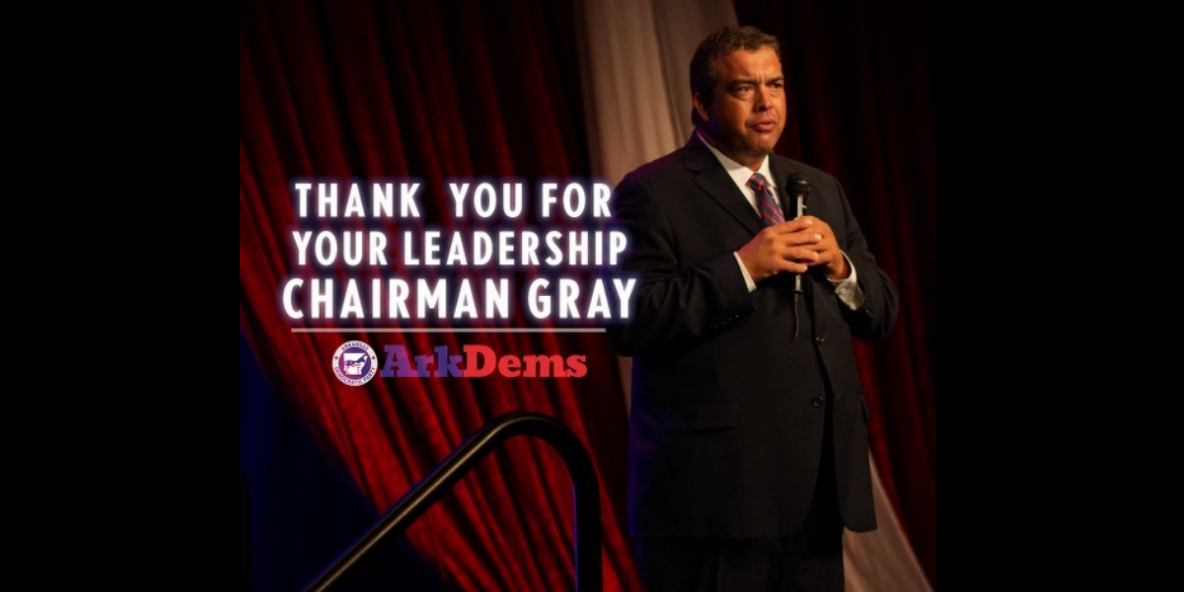 LITTLE ROCK — Democratic Party of Arkansas Chairman Michael John Gray is accepting a new professional opportunity and intends to resign as party chairman effective September 1st. Gray made the announcement to party leaders during an Executive Committee meeting on Monday night, followed by an informal meeting of the State Committee.

“Our state has been through immense changes since I began serving in public life and the challenges seem to be more important than ever. As Chairman I’ve met people all across this state, with diverse backgrounds and upbringings, and found that when you turn down the noise from the cable television rhetoric most of us want the same thing. We want a good life for our families and we don’t want to be ignored by the people who claim to be our leaders. I got involved to give voice to my neighbors, the forgotten communities across the Delta, and to build a path for those who haven’t always been engaged. I will continue to do that every day of my life. I am a better person for it and am extremely grateful to the friends that I have made across this state, and I am humbled by the support they’ve given me.

Serving as party chairman has been a privilege and at times a heavy burden. This era in Arkansas politics for Democrats has often been defined as a battle for survival, to keep the flame burning so that the torch can be passed to our next generation of great leaders. We have faced uphill climbs and have not always achieved the electoral successes we wished for, however we have identified and engaged a new group of leaders as more candidates have stepped up over the last four years than we have seen since the change in term limits. We saw legislative seats flip in our favor, which had not happened since 2012. We’re excited about the effort to lower candidate filing fees to allow it to be even easier to run for office. Together we have shared some other important victories, including changing what this party looks like. Our party leadership, our Democratic lawmakers, and our staff is more diverse and dynamic than ever. I’m extremely proud of the staff we’ve assembled and the hard work that’s been done. These are notable achievements that have been earned the hard way and we must ensure we do not roll back on these gains.

I look forward to the future with optimism, knowing that our shared vision to make Arkansas a better home for all of us will continue and grow. These times demand us to be resilient, to find common ground, and to be unafraid of what obstacles lay ahead. I know that we will continue to do the work, together, and that Arkansas will be better for it.”

“Democrats in Arkansas are resilient and they know how to accept a challenge. Michael John Gray has been a dedicated and committed Chairman of the DPA and I thank him for his service to our state. Democrats across the state will rally together to fill this void and work hard to strengthen our Party. I wish Michael John much success in his new endeavor.”

“Arkansas Democrats are fighting important battles all over our state, and I am grateful for Michael John’s contribution to our shared mission. He and I came into the Legislature together and experienced first-hand the political upheaval in our state. I know that service to Arkansas will always be a part of his life, and I look forward to seeing what the future holds for him as Democrats continue our collective work for the state that we love.”

“Leadership is difficult, especially in the current, politically charged environment. I am grateful to Michael John Gray for his service to Arkansas and to the Democratic Party of Arkansas. As I wish him every success, I look forward to continuing our hard work of growing the Democratic Party across Arkansas.”

“I wish Chairman Gray well as he leaves the Democratic Party of Arkansas to accept a new challenge. We thank him for the work, commitment, and time he devoted to the Party. This change opens opportunities for new leadership with new vision and excitement for the future.”

Gray has served as Chair since 2017. DPA Vice Chair Nicole Hart will serve as Interim Chair until the party decides when it will set an election. The next State Committee meeting is scheduled for October.

Michael John Gray is a lifelong resident of rural Arkansas. A third-generation farmer and family farm operator, he began his political career when he was elected as a city councilman in Augusta. Gray served two terms in the Arkansas House of Representatives. In his first term, his Democratic colleagues elected him as the House Minority Leader, and he served in that role from September 2015 to May 2017. Gray was elected as Chair of Democratic Party of Arkansas in April 2017. Gray currently resides in Augusta with his son, John Major.

— Build The Party With Us —