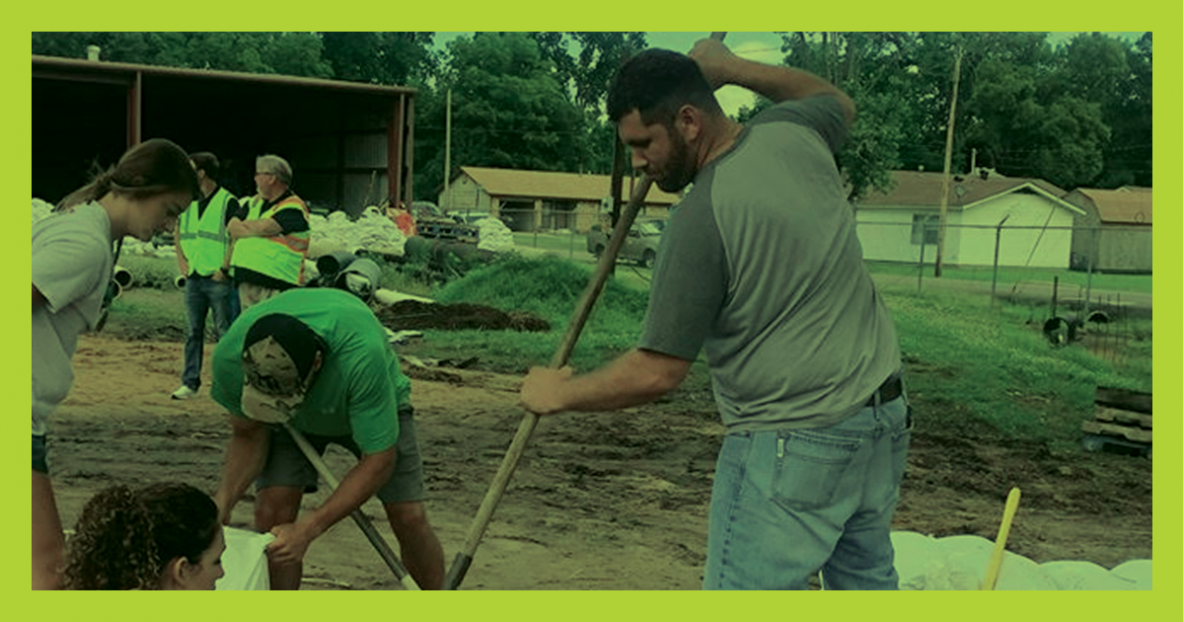 Arkansas is full of exciting candidates who are ready to put in the work to defeat Republicans in the 2020 election. One such candidate, Chris Casey of Dardanelle, a veteran of the US Army, is campaigning to defeat Rep. Mary Bentley. However, he’s been going to work to help save the people of his district in many different ways.

Throughout the flooding, Chris has been taking actions to help save his community like sandbagging in and around Dardanelle.

In addition to his labor, Chris knows that flooding has much bigger implications than broken levees and sandbags. Chris is passionate about environmental reform and is not afraid to advocate for it. For a week in June, Chris traveled to Washington D.C. to discuss carbon free energy solutions with Senator Tom Cotton, also from Dardanelle. One of Chris’s solutions is a carbon fee and dividend, which would reward individuals and corporations who choose not to use fossil-fuels.

This isn’t the first time Chris has taken action…

On Thursday, Gov. Asa Hutchinson announced a task force to study the Arkansas levee systems. The task force will be staffed by the Arkansas Department of Emergency Management and Arkansas Natural Resources Commission. In addition to new research, the governor plans to request $10 million from the Arkansas Legislature to spend on repairs.

In Yell County where the Hollow Bend levee went from a pea-size hole to a 300-foot gap, destroying farmlands and homes, this news couldn’t come at a better a time. Especially since local and county officials’ hands were tied when it came to maintenance and upkeep of the levee.

On June 1, water from the levee breach was a mere 300 yards from my home in Dardanelle. After having spent that past week helping the community fill and deliver sandbags, the knock on our door came about 4 p.m. It was time for my family and me to evacuate.

While the south side of Dardanelle was spared in this disaster, not everyone in the county was as lucky.

Yell County Emergency Management Director Jeff Gilkey said in an article in the local newspaper that there are setbacks surrounding the laws governing levee boards and the duties they are tasked with. For example, he mentioned a lack of funding for maintenance and repairs to the levee systems. Another issue with the levee boards is the legalities surrounding who is authorized to make repairs on the levee.

Because of the legalities and funding issues surrounding the levee board, the county wasn’t able to address the issue proactively. Despite their hands being tied on proactive measures dealing with the levee system itself, proactive measures were taken by Gilkey, Mayor Jimmy Witt, and Yell County Judge Mark Thone that got everyone out of harm’s way in plenty of time.

The governor’s swift action in creating this task force and strict timeline to receive the findings and recommendations by the end of this year is something to be applauded.

Governor Hutchinson said in his press release: “The flood of 2019 revealed the many weaknesses in our state’s system of levees and points to the urgent need to formulate a plan to coordinate inspection and maintenance in cooperation with the Corps of Engineers and the local levee boards. We can’t postpone this planning until another historic flood puts us to a test.”

I do hope the governor places a serious emphasis on the laws governing the levee boards and that the task force makes a recommendation to allow more flexibility in order to prevent or mitigate future disasters. The best way to do that is to hear it from the people on the ground. Citizens representing flood-impacted areas or with knowledge of engineering, construction, funding, or oversight of levees can be added to the task force, if deemed necessary by the governor.

From what I’ve experienced as a resident on the ground, Yell County has plenty to offer.