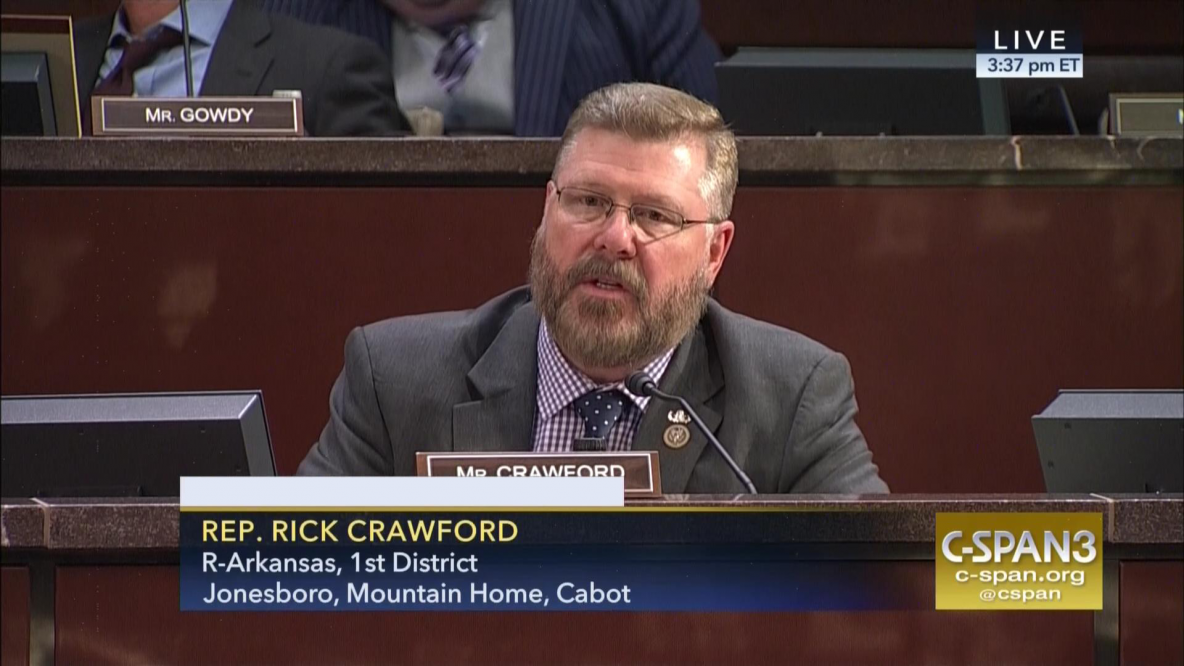 But that hasn’t dissuaded Desai. Or his army of volunteers.

Over the summer and in the course of just 30 days, his campaign held events in all 30 counties of the First Congressional District. When pressed by reporters, incumbent Republican Congressman Rick Crawford wouldn’t commit to visiting all the counties in the district he has represented since 2010. 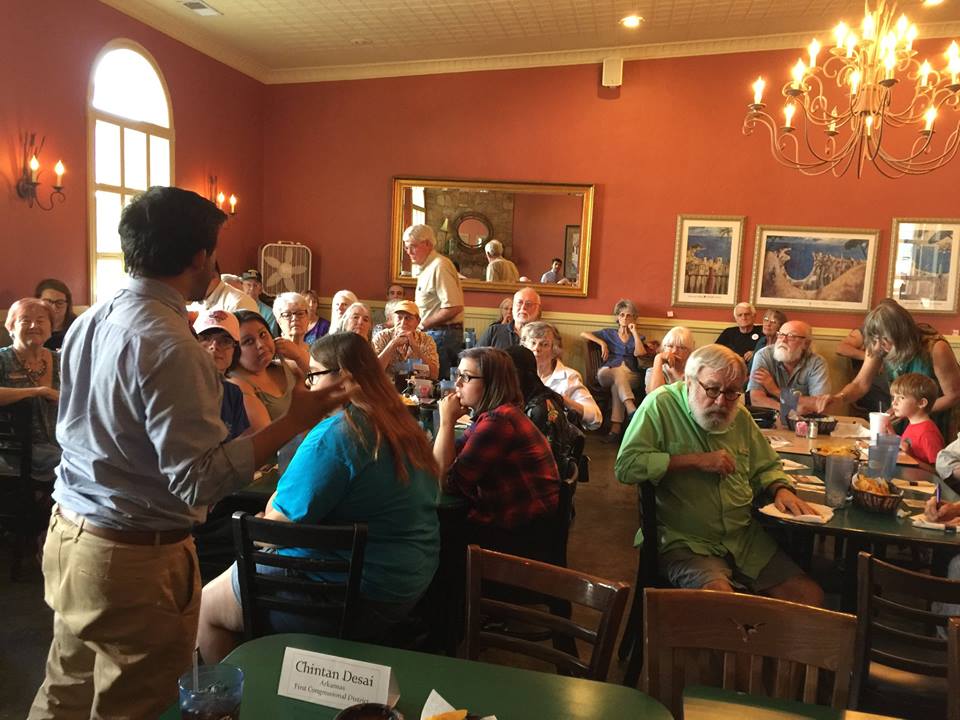 As the miles racked up on his personal car, Desai saw the concerns of residents in the First District come into focus. The more and more he travelled, the more similar their stories sounded: They were worried about what comes next for their families and their children.

“There are too many families in this district that have a deep dilemma,” said Desai. “They feel like their children will have to leave Arkansas to find a better life. I talk to countless young people that are certain they won’t be able to find the jobs they want in this state.”

In their only televised debate, Desai used his opening remarks to detail how his own family history mirrors those families feeling left behind in the First District.

“I am a proud son of immigrants, who moved to this country in the early 1980s, because they were looking for better jobs so they could start a family. I think about their decision to leave behind everything as I talk to people in the district. 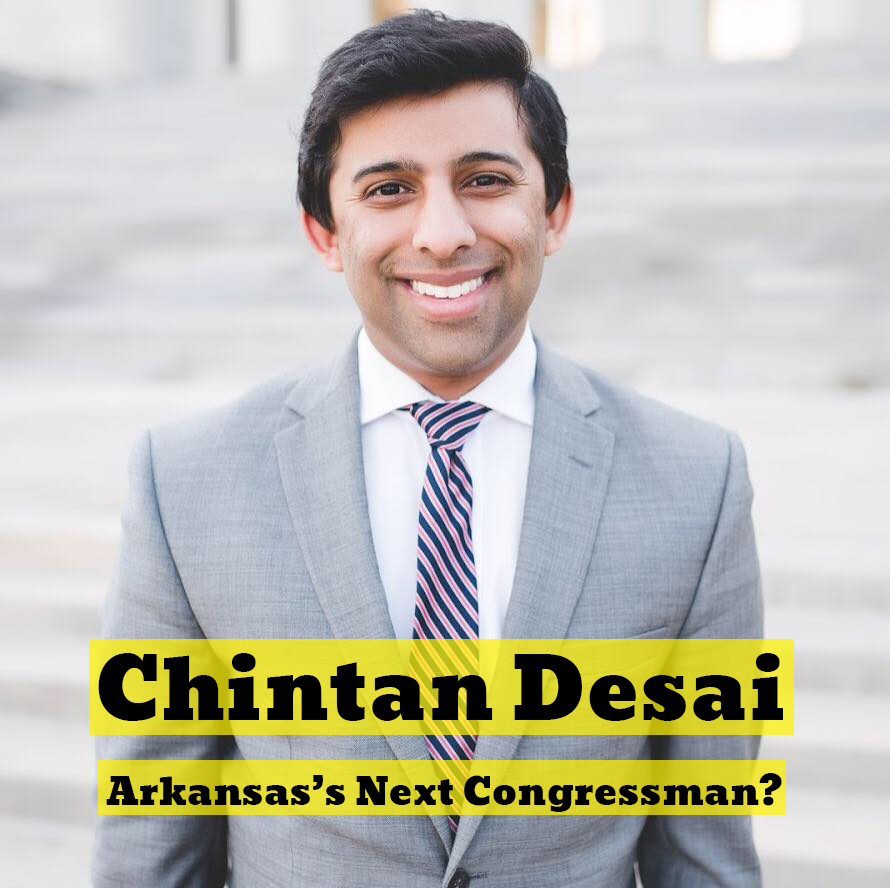 “My dad flipped burgers at a local fast food restaurant,” recalled Desai. “My mom scrubbed floors in a local arts and craft store. And they both worked second jobs at a motel just to make ends meet. Inspired by their hard work, I was called to a life of public service.”

His public service started the day he graduated from college. Though the Teach for America program, he moved to Helena, Arkansas to teach fifth grade social studies. It was in those classrooms that he first saw the striking similarities between his student’s families and his own.

Achieving economic opportunity meant leaving their homes. If their kids were going to succeed, they need jobs they couldn’t find in their hometowns or even in Arkansas.

“What makes all of this even more difficult is that we have a representative in Congress who doesn’t seem to understand or care about these concerns,” Desai remarked on stage. “Congressman Rick Crawford has refused to listen to his constituents and refused to hold town halls. He has a constituent office that literally has cobwebs in the doors.

“If our Congressman actually knew about the issues in the district and was actually talking to folks he represents, then he would know that we need to protect and expand Medicare so that more folks have access to high-quality health care. He would know that it is well-past time to raise the minimum wage, because hard-working Arkansans deserve a raise. If he took time to actually talk to voters, then he would be standing up to Washington against this unnecessary trade war.”

Desai ended those opening remarks with a message he has used throughout all corners of the district: “You deserve to have a congressman who is going to listen to you and who is going to fight up for you in Washington. That is what I intend to do.”

As he has done throughout the campaign, Crawford has relied on talking-points generated by Republican strategists in Washington. For example in defense of his robust support of the administration’s trade tariffs, he said Arkansas farmers will just have to exercise “strategic patience.” Desai quickly pointed out phrases like that are the reason people in Arkansas have so much distrust in the government.

Crawford has also repeatedly stated that he ranks among the “most accessible congressmen,” though he can point to no evidence and cannot rebuke the claim that his congressional offices in the district are rarely open.

As could be expected from a four-term congressman, Crawford has refused to buck his national party, even when his position would negatively impact his district. If this was ever any doubt, Crawford’s vote in May 2017 should complete the idea of an “out of touch” representative.

His vote to repeal the Affordable Care Act would have destroyed health care for over 100,000 in his district and over a million people in Arkansas. If the bill he voted for had been signed into law, Arkansans would have:

Desai has made Crawford’s vote to rob health care from his constituents and remove protections for pre-existing conditions a hallmark of his campaign. This contrast becomes pretty stark when Desai offers his solution to the rising costs of health care: universal health care.

“Health care coverage is a basic human right,” Desai states on his campaign website. “All Arkansans, regardless of health, age, gender, employment status, or financial situation, should have access to healthcare coverage. And medical care is not only a moral imperative, but it is also a job engine for many communities.” 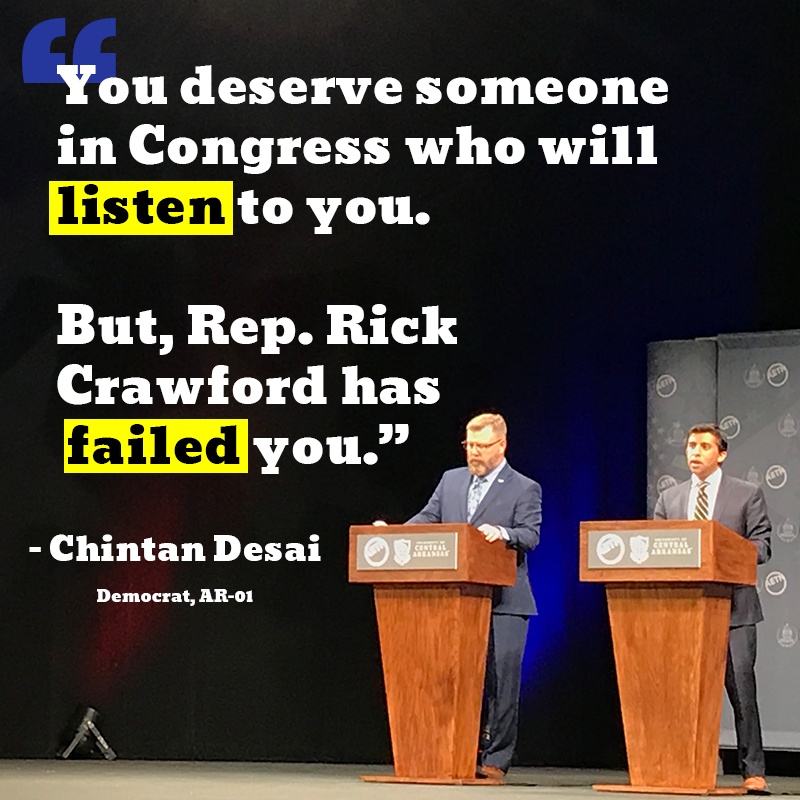 Crawford refused to counter Desai’s vision for health care in the AETN debate, claiming that Desai would prefer a “massive government that controls every aspect of your life.” Desai reminded the congressman that the United States was the only developed country in the world that fails to guarantee health care as a right.

As the candidates and the country head into November, the contrast in fundraising could be a deciding factor. Crawford holds a 14-1 advantage in campaign funds; however, Desai has pointed to Crawford’s war chest as less of an asset and more of a liability.

“Congressman Crawford has ten pages of corporate PAC money given to his campaign,” Desai said in the debate. “He has gladly taken that money, so it’s funny that he would talk about being motivated and driven by ‘the people.'”

Desai’s criticism of Crawford campaign donation is well-founded though, as Crawford has taken hundreds of thousands from special interests, including Exxon Mobil ($2,500), Stephens Inc. ($2,500), Paul Ryan’s PAC ($2,000), and Lockheed Martin ($2,000).

“My campaign has been funded with individual contributions,” said Desai, “and our average contribution is $50.”

With under a month left, Desai continues to travel across all 30 counties in the First District. He’s offering something so many families thought they couldn’t have: a voice that speaks for them.