It’s all but official, the 92nd General Assembly of the Arkansas Legislature is about to conclude its business at the state Capitol in Little Rock. The 24 Democrats in the House, and 9 Democratsin the Senate have done some good work, in the face of some tough odds. 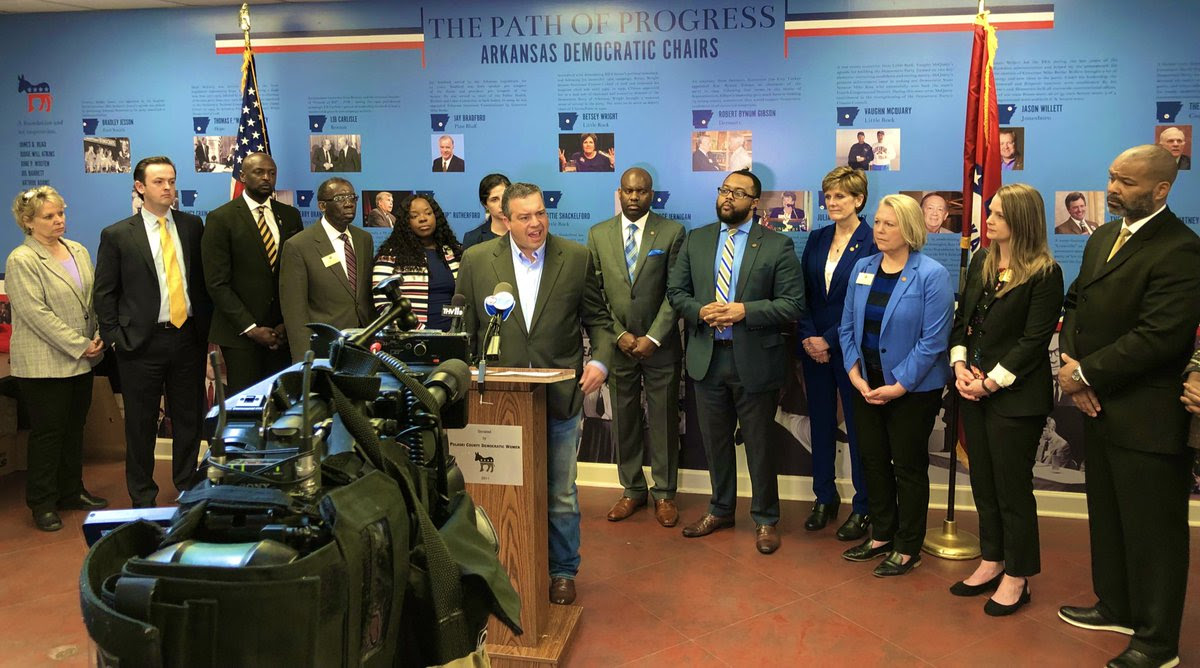 THE MINIMUM WAGE: Democrats in the Legislature successfully beat back multiple attempts to virtually eliminate the state minimum wage for hundreds of thousands of workers. Arkansasoverwhelmingly voted to raise the minimum wage in 2018, but that didn’t stopped Republicans in the Arkansas Legislature from trying to undo the will of the people.

Arkansans know the value of hard work and that families ought to be able to support themselves. That’s why a real minimum wage is so important.

VOUCHERS: A movement has been afoot to decimate our public school system by turning over your tax dollars to private schools. Democrats were out front and vocal about protecting students from this attack on the very idea of public schools. Multiple efforts to erode public schools were held at bay because of Democrats in the Arkansas Legislature.

STAND YOUR GROUND: State Senator Stephanie Flowers of Pine Bluff captured the good-will of just about the entire nation for her passionate rebuke of a Stand Your Ground bill. Her passion flipped momentum in the state Capitol and helped stop a dangerous firearm bill from becoming law.
BUFFALO RIVER POLLUTION: The Buffalo National River faced a dire threat because of a bill by Republican state Senator Gary Stubblefield that would have stripped away protections that have made the Buffalo River one of the most wild and pristine waterways in the world. It could have turned the river into a dumping ground for industrial hog farms.
Arkansas Democrats stood up against the threat to Arkansas’s waterways and the Buffalo National River. It’s a Democratic tradition.

– A slate of new ethics laws were passed, including a prohibition on state officials serving as lobbyists (Sen. Keith Ingram) and increasing penalties for using campaign funds as personal income (Sen. Will Bond).

– A whole range of criminal justice issues were tackled, including: a bill by Rep. Charles Blake to decriminalize small amounts of marijuana; Rep. Jamie Scott’s legislation to protect minors forced into human trafficking and prostitution from facing criminal charges; Rep. Scott and Sen. Elliott teamed up to limit solitary confinement for juveniles to 24 hours; Sen. Leding and Rep. Nicole Clowney increased penalties for violating an order of protection; Rep. Vivian Flowers addressed the issue of child marriages; while Rep. Fred Love increased penalties for crimes committed in an area of worship.

– While there were attacks on education this legislative session, Democrats still advanced some meaningful bills. Sen. Linda Chesterfield guaranteed continued funding for Historically Black Colleges and Universities; Sen. Elliott banned corporal punishment for special needs children; and Democrats supported increased teacher salaries, though they need to be even higher.

Without the presence of Democrats in the Legislature, a multitude of voices would not have been represented at the state Capitol or in the media. While not everything we wanted became law, Democrats forced some powerful conversations that will pay dividends in the years to come.

EQUAL RIGHTS AMENDMENT & EQUAL PAY: Sen. Joyce Elliott galvanized Democrats by standing up for the adoption of the Equal Rights Amendment. If it had passed, Arkansas would have played the historic role of enshrining women’s rights in the U.S. Constitution. Freshman Rep. Tippi McCullough championed the cause of equal pay, on national Equal Pay Day, later in the session.

DOMESTIC VIOLENCE  & FIREARMS: Rep. Nicole Clowney championed a pair of bills to protect victims of domestic violence. One bill would have allowed victims of domestic violence to break a lease shared with their abuser, while another would have restricted an abuser from possessing a firearm. Fellow freshman Rep. Denise Garner introduced a trio of powerful bills to bring about real gun-sense legislation in Arkansas, including to repeal campus carry.

PRISON SLAVERY: There are very few places in the world where a human being can be forced to labor without any compensation, Arkansas prisons are one of those few remaining places. Rep. Vivian Flowers launched a bold campaign that continues to gain traction.

PUBLIC SCHOOLS: The state Board of Education doesn’t have a plan for the districts under state control, and children and parents are suffering as a result. Parents should never lose their voice in their children’s schools, but four years ago the State Board of Education took away the say of parents in the Little Rock School District, dissolved the democratically elected school board, and began closing down public schools while expanding private charter schools. Democrats presented a real plan, and engaged grassroots community activism. That work is continuing to shape the ongoing battle over public schools.

HEALTHCARE: 18,000 Arkansans were thrown off their healthcare because of a Medicaid reporting requirement that has been thrown out by a federal judge. Arkansas Democrats took charge immediately, and filed legislation to restore coverage to these Arkansans. The governor wanted to sweep this under the rug, but Democrats successfully brought the issue to the top of the conversation. This issue continues to play out as backers of the illegal reporting requirement seek appeal in court.

Thank you all for your support, your phone calls, your presence at the state Capitol and in your communities. This is just a small sample of the immense work done by Arkansas Democratsduring this year’s Legislative session. The General Assembly will official conclude, sine die, on April 24th.

But we need your support to make sure Arkansas Democrats can keep up the good work – and can get some reinforcements in the Legislature!

Sign up for Heart of the Party and help support your Democratic Party of Arkansas.