For the first time since 2012, the Democratic Party of Arkansas flipped two statehouse seats. Those successful candidates are a part of something. And their work shows how this party keeps moving forward.

Our party recruited and fielded the most impressive slate of candidates that our state has seen in a generation. These candidates were not fueled by political careerism or hatred of the president. They ran for office because their communities were not represented. And while most of them won’t hold office in January, their service—and their campaigns—are not just one-offs.

This is the start of something. Make no mistake, the future is promising.

Denise Garner knew the challenge facing her when she decided to run against the Republican incumbent, Representative Charlie Collins. From the strong backing of the Republican Party, including Governor Asa Hutchinson, to Collins’ statewide name recognition, the race always seemed tough.

From the start, Garner highlighted the failures of Collins’ tenure, placing the spotlight on his disastrous and ill-conceived “campus-carry” legislation. But, her candidacy was not defined by Collins’ monstrous flaws. She ran on the ideas that people in District 84 cared about. She talked about lowering the cost of healthcare and prescription drugs, two areas of expertise considering her nursing background.

Our state party knew Garner was going to do the work. Alongside her campaign and its volunteers, our state coordinated campaign and its canvassers went door-to-door helping to spread her message. And just look at the results.

Sitting right in front of Representative-elect Garner at the State Capitol will be another charismatic change agent, Megan Godfrey.

The demographics of District 89 always made it a target for our party. The large, under-represented Hispanic population and the urban neighborhoods of Springdale showed a clear path to victory. But, like Garner, Godfrey knew it wasn’t easy. She knew that she had to build on the success of Irvin Camacho, the Democratic candidate in 2016.

She also knew that she couldn’t just rely on “turning out” Latinx voters. She knew that community deserved a representative that understood their concerns and who was willing to be their voice. Godfrey and the party’s Director of Latinx Engagement Diego Quinones organized events of Latinx business owners and town halls throughout the district.

Godfrey did the work and the party stood right beside her, and now she gets to be the voice for a community that hasn’t felt heard in years.

Of course we had setbacks, but that’s what growing is about. That’s how we learn.

As our cities stayed Democratic, our rural towns and counties drifted further to the Republican Party. This divide will only grow in the coming elections, unless we commit ourselves to doing the work. Our message must be distanced from a national identity of “resistance” and instead be defined by the willingness to do the work of representation.

It will be hard, but it isn’t out of reach.

Look at Representative Michael John Gray’s race. He fell just 98 votes short of re-election. Though the loss hurts, it shows us a message and a way forward.

President Trump won District 47 by over 2,000 votes, and his popularity has only grown since the 2016 election. Had Gray not done the work in the district by not asking the community to buy into his representation, the race would have long been out of reach. 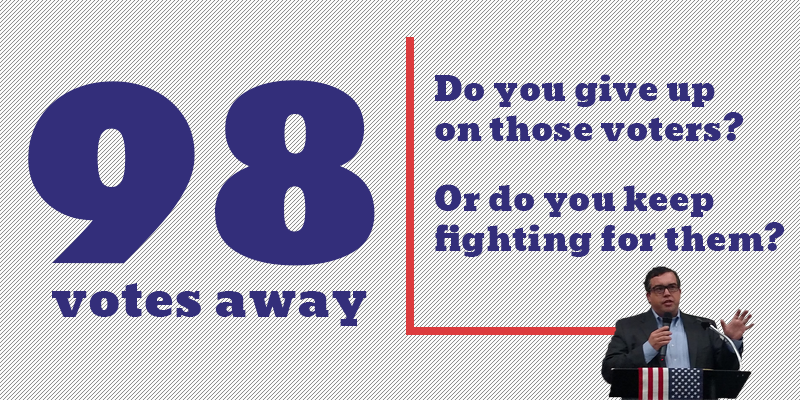 We can throw up our hands and say those 98 voters are not worth it. We can write off the district and all districts like it as “unwinnable.” And there are many in this party, both locally and nationally, that think we should.

Those 98 voters are winnable and worth fighting for. The same can be said of the 118 voters that chose the Republican challenger over Representative Scott Baltz in District 61. If the Republicans decided to fold-up shop when they were in our position back in 2010, they never would have found themselves back in power.

The clear lesson from the midterm should be to continue the work. So many of these statehouse races were narrow margins—8 of the races we lost were decided by less than 1,000 votes. We will win those races in 2020 if we do the work now of engaging those voters. If we learn their concerns and commit to offering solutions, we will see the success of our work.

Our message is the right one. And it’s the right time. We can’t hang our head low and just wish for a better Arkansas, we have to make it happen.

Let’s go do the work.