It’s shameful enough that Arkansas’s elected leaders delayed emphasizing wearing masks for months, while COVID spiraled out of control and put Arkansas months behind where we could be. But now elected Republican leaders are not only refusing to deal with COVID and what it will do when school re-opens, but are going so far as to call for open revolt.

Sen. Bob Ballinger is flippantly encouraging communities to put themselves at risk and endangering our nurses, doctors, and medical professionals who are working to keep this crisis from boiling over. The Centers for Disease Control is clear that we need to embrace the easy, common sense, responsible action of wearing a mask in public if we want to stop this economically paralyzing and deadly pandemic.

“We are not defenseless against COVID-19,” said CDC Director Dr. Robert R. Redfield. “Cloth face coverings are one of the most powerful weapons we have to slow and stop the spread of the virus – particularly when used universally within a community setting. All Americans have a responsibility to protect themselves, their families, and their communities.”

It’s clear Arkansas needs new elected leadership who are capable of taking this crisis seriously and getting us through it.

As the Arkansas mask mandate goes into effect Monday, we can all do our part by wearing a mask. The governor and the state’s elected leaders played politics with our lives for more than four months, and now it’s unclear if Arkansas’s mask “mandate” will even be practiced throughout the state. These times demand accountability, both for our personal actions and for our political decisions.

The shift from the state’s elected leaders comes late but is key to saving lives and flattening the curve. We’ve already reached more than 32,000 cases of COVID-19 in Arkansas; right now, we sit at 7,000 active cases. We must flatten the curve. 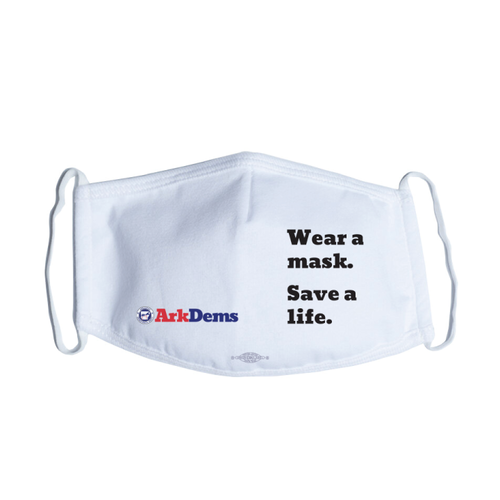 Add an ArkDems Mask to Your Weekly Rotation.

Make #WearAMaskSaveALifeAR trend today on Twitter, and celebrate this step in the right direction. Now Let’s Do The Work